Home » Why Do We Eat Cranberry Sauce at Thanksgiving? 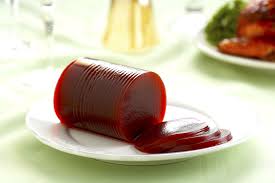 When I think about Thanksgiving traditions in our family, I sometimes wonder WHY?
Like, why did my mother always buy a kosher turkey and then cover it in bacon? I laugh about it now, but she was on to something. She bought that turkey because of the way it was processed – with salt, much like the current brining craze. Then she layered on the bacon so the bird would get a little extra flavor and moisture from the bacon fat melting as it cooked. Is a kosher turkey with bacon an oxymoron? Or was Mom just brilliant in the kitchen?

And then there’s the question of where that cranberry sauce came from. Evidently, cranberries are one of three commercially grown fruits (blueberries and grapes are the other two) that are native to the U.S. Cranberry sauce might not have been on the original Thanksgiving table in 1621, because they didn’t have the sugar cane to make it. But 50 years later, the Washington Post noted that both the Native Americans and the English cooked cranberries with sugar and ate the sauce with their meat.

Cranberry sauce really took center stage at Thanksgiving after 1796, when Amelia Simmons mentioned it in her book, American Cookery. A short time later, in the early 1800s, our friends at Ocean Spray figured out an easier way to harvest those little red berries. They flooded the bogs and just scooped them right out of the water as they floated, instead of using the labor-intensive process of hand-picking them from vines. But it wasn’t until 1912, when those Ocean Spray folks discovered that they could make cranberry sauce with the berries that were damaged during the harvest, that it became a holiday staple.

So – when it comes to my Thanksgiving dinner, kosher turkey and bacon go together like bruised cranberries and gelatin! And from our home to yours, may you enjoy all of your Thanksgiving traditions – whatever they may be.